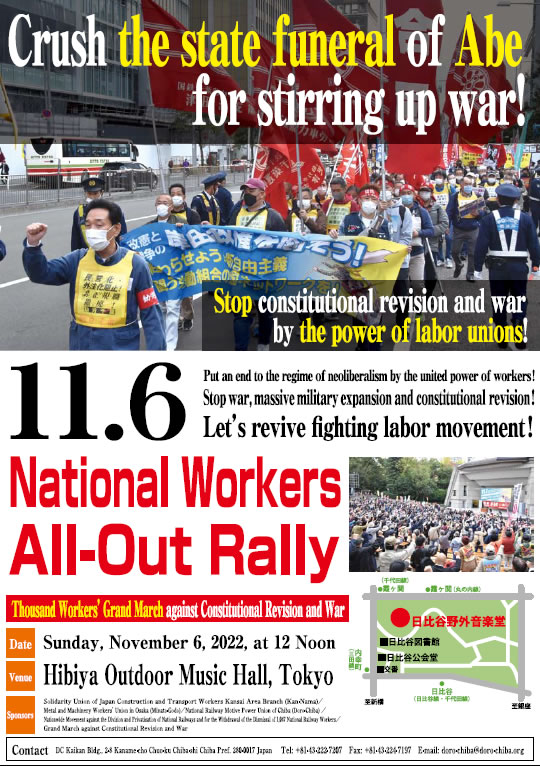 Abe’s policies: inequality, poverty and deaths by overwork
Fumio Kishida’s cabinet plans to hold a state funeral for former
Prime Minister Abe on September 27; people’s indignation is
growing stronger and stronger.
Abe has trampled on the workers for the benefit of big capital.
“Abenomics” has deprived workers of social security and welfare and forced to live with increased consumption taxes,
while lavishing money on big capital. Medical care has terribly collapsed. Real wages fell. Non-regular employment expanded.
Abe’s new labor law pushed for overwork to death-Karoshi-under the guise of “Work-style Reform.”
Preparations for war also progressed rapidly. Abe who had longstanding
desire to revise the constitution, dismantling of Article 9, forcibly replaced the traditional governmental view with the new interpretation that the exercise of the right to collective selfdefense does not contradict the Constitution and passed a set of security and war bills according to the new definition. Ignoring the anger of Okinawans, he pushed through the construction work of a new military base at Henoko, enacted the Act on the Protection of Specially Designated Secrets to suppress anti-war
movement, and introduced the crime of conspiracy.
As the Moritomo, Kake and Cherry Blossom Viewing cases showed, he took politics into his own hands and the bureaucracy has degraded into an obedient tool of his politics. Abe’s policies have created the reality of a Japan without rule of law and democracy.
Abe’s state funeral intends to celebrate all these as his
“achievements” and mobilize the people for war. In addition, the
Myanmar’s military junta, which massacred more than 2,000 people in the coup, will be invited.

The LDP cannot cut ties with the Unification Church.
The collusive relationship between the LDP and the Unification Church has been exposed one after another. Of all the members of the LDP, former Prime Minister Abe was the one most closely connected with the UC since his grandfather, the war criminal Nobusuke Kishi. It is not surprising that the anger was directed at Abe.
The goals of the LDP and the UC are the same. The LDP consciously promoted the UC as a counter-force to crush the labor and student movements. The LDP knowingly received money from the UC which had been extracted from the people through “spiritual sales” and also used the UC to conduct its election campaigns.

ThekishdagovernmetagreedwichtheU.S.Bide nadministration to go to war on China under the pretext of a “Taiwan contingency.” The vision of the U.S.-Japanese government to overthrow the present Chinese government by war is in accordance with the “philosophy” of “victory over
communism” of the Moonies. It is impossible for the LDP to cut ties with them.

Stop the U.S.-Japanese war on China!
The war in Ukraine, which broke out in February, looks more and more like quagmire. The U.S., European and Japanese governments are providing military support to Ukraine, and further prolonging the war.
The threat of world war and nuclear war is growing. This was clearly demonstrated in the case of Taiwan, where in August, U.S.
House Speaker Nancy Pelosi flew to Taiwan on a military plane and met with President Tsai Ing-wen. The U.S. military deployed the nuclear-powered aircraft carrier USS Ronald Reagan and the assault landing ship USS Tripoli to the waters around Taiwan.
Japan’s Air Self-Defense Force also conducted joint exercises with the U.S. Air Force. The tense situation was triggered by provocations by the U.S. and Japanese governments. The Kishida government is attempting to deploy in Okinawa and other Nansei Islands long-range missiles capable of reaching the Chinese mainland.
The stock prices of the military industry soar. Capitalism, which has lost its margin of growth and has reached the end of its life, needs war and creates war.
The Kishida government’s Basic Policy on Economic and Fiscal Management and Reform 2022 has defined a national transformation that gives the highest priority to doubling defense spending and focuses all its efforts on this. Everything in society is moving toward war.

Real unions against war
War is what stirs up nationalism and calls on workers to give their lives. It is the most violent form of violation of workers’
rights. Opposition to war is the essential task of the trade unions.
Doro-Chiba has issued a new declaration of refusal to cooperate in the war in anticipation of the impending war. Solidarity Union of Japan Construction and Transport Workers Kansai Area Branch (Kan-Nama) and Metal and Machinery Workers’
Union in Osaka (Minato Godo), are fighting against war in their workplaces and communities tenaciously and unflinchingly despite harsh repression.
The largest national trade union center, Rengo, is increasingly aligned with the Liberal Democratic Party. We must revive the unions that fight against capital and the government’s war policy. We call for support for the rally and for the participation from around the country.