We are holding the 24 the annual November National Workers All-out Rally, strengthening our organizing efforts to establish a nationwide network of militant labor unions.

The Covid-19 disaster has covered the entire world, being caused and escalated by neoliberal globalism, putting humanity at risk of survival. The collapse of health care, the widening social gap, the drastic increase of non-regular workers, the endless cycle of poverty, bankruptcy and unemployment, the harsh reality of women being driven to suicide; it is time for workers and citizens to defeat neoliberalism in order to live as human beings. The drumbeat of nationalism and war is now sounding louder and louder. In the midst of the raging Covid pandemic, the government forced the Tokyo Olympics just for the sake of national prestige and profiteering—Olympics for money over life.

In 1987, the then Prime Minister Yasuhiro Nakasone, Japanese initiator of neoliberalism, forced through the division and privatization of the Japan National Railways, which opened the floodgate of neoliberal offensive in Japan. It busted labor unions, privatized a broad swath of public services, created 21 million non-regular workers and engulfed the whole society. However, neoliberalism is now collapsing due to the contradictions of its own creation. The government has no other way than to push forward for tomore extreme form of neoliberalism. We all have had enough of this! Everyone is trying to turn anger into action. The flame of struggle is burning all over the world, and history is about to be set in motion. The time has come for the workers of the world to rise up. We are calling for a workers’ rally on November 7 to revive the labor movement and terminate neoliberalism.

In 1998, the November National Workers All-out Rally was initiated by three unions—Kan-Nama, Minato-Godo, and Doro-Chiba—in order to fight back against the reactionary court ruling concerning the division and privatization of National Railways; “the Japan Railway Companies have no legal liability for the firing of 1,047 national railway workers. A sense of imminent crisis—a “if such thing goes on, workers’ rights will fall to the ground”—united the three unions together.

Two decades plus years later, we are now once again standing at the crossroads of history. Kan-Nama’s legitimate union activities, such as strikes and collective bargaining, have been subjected to criminal repression and as many as 89 union members have been unjustly arrested. This is the biggest union busting in the post-WWII period, as if we are going back to the days when labor unions were banned. However, Kan-Nama has crushed the surprising demand by the prosecution of eight-year prison sentence, which was meant to impose President Take imprisonment without suspension of sentence; the district court’s ruling was partial acquittal and a reactionary sentence of three years imprisonment with five years suspension. It is a reactionary judgement, but the court was apparently forced to step back. Kan-Nama is successfully fighting back. We must win this battle for the rights and future of all workers.

Meanwhile, in the workplaces of JR, the PM’s Office is leading a fierce attack to destroy unions in an attempt to create a model of a “society without unions.”

The pandemic has completely ruined the privatized railroad business, and in order to survive the crisis, JR is trying to outsource all of its blue-collar jobs, force workers to transfer to spin-off companies, and proceed with the massive closure of railroad lines. Doro-Chiba is confronting this attack and organizing workers of the contractors.

In the name of “Work Style Reform”, the management in all industries promote total non-regularization of workers, abolition of all restrictions to dismissal and destruction of the right to organize. Accumulated experiences of Minato-Godo, which has been victorious in confronting the attack under neoliberalism and has organized the whole region into one labor union beyond the walls of enterprises, is now about to show its true value.

In the last session of the Parliament, a revision of the Referendum Act was enacted, and the constitutional revision is looming. Based on the recent Japan-U.S. joint statement on a contingency “across the Taiwan Strait” a massive military buildup is underway, and Japan-U.S. joint military exercises are about to be conducted in Okinawa and throughout the country. Despite the explosion of infection, the Japan’s government is sacrificing everything and forcing the Olympic Games to be held with lies.

Workers all over the world are standing up like a prairie fire to fight against poverty, destruction of jobs, discrimination and oppression, and state violence brought about by neo-liberalism. In particular, we must fight in solidarity with the life-and-death struggle of the people of Myanmar against the military coup d’état and with the Korean Confederation of Trade Unions, which achieved one million memberships. We are planning to hold November 7 National Workers’ All-out Rally as the Tokyo-Seoul International Joint Action, in the midst of a tough situation of Covid-19 pandemic.

Let’s revitalize the labor movement together. Terminate neoliberalism! We will call on you to join us together with many of your colleagues in Hibiya Open-Air Concert Hall on November 7. 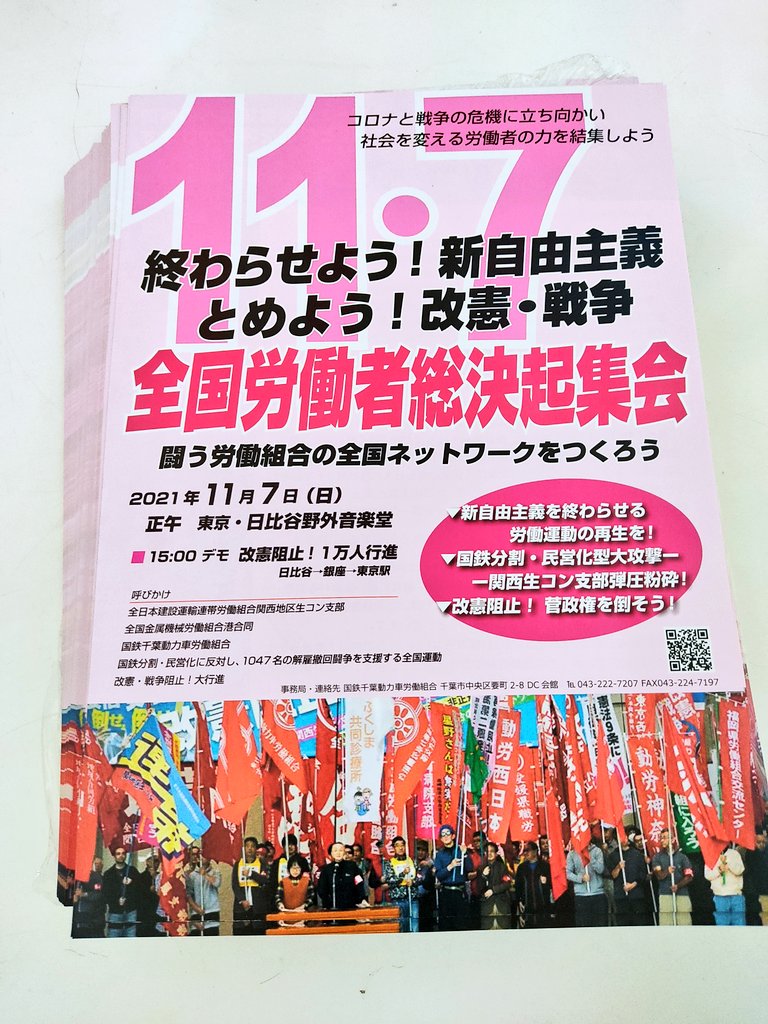