Fight against War, Privatization and Dismantling of Labor Laws

It was 1998 when we started holding the November National Workers’ All-Out Rally with a call for establishing a nationwide network of militant labor unions. This year we will hold the 21st. We are sincerely grateful to you for joining together under this slogan from all over the country and the world.

On August 12, Prime Minister Shinzo Abe has declared his intention to introduce a Liberal Democratic Party (LDP)-drafted bill for revising Japan’s Constitution during the extraordinary Diet session expected to be convened this autumn. Abe is running in the LDP leadership election in the coming September, setting the stage for a revision of the Constitution as a major issue. He is trying to push ahead with a new Constitution go into effect in 2020. US President Donald Trump stressed “America First” nationalism and embarked on a tariff war which heads rapidly toward a full-blown trade war.

We have been preventing for seven decades since the end of WWII from revising the Constitution which outlaws to go to war. But now we are facing a great danger. If it is provided that Japan shall have the Self-Defense Forces in Article 9, it will lose its war-renouncing meaning and be changed into an article that legalizes war. “We shall never go to war”, “We shall never let the Constitution revised”—this determination was the most important starting point of the post war Japanese labor movement. The Constitutional Revision will destroy labor movements and dismantle basic labor rights. This is the attack to overturn the present state of democratic society.

Although tens of thousands of protesters demonstrated outside Diet, Abe government ignored people’s angry voices and railroaded a package of Work-Style Reform bills. “This is the first major reform in 70 years,” Abe boasted, referring to the 1947 enactment of the Labor Standards Act. It was another attack of the Constitutional revision to eventually destroy the post war labor legislation. The “labor reform” package, which comprehensively revises eight labor-related laws including eight-hour day, legalizes Karoshi (death from overwork), puts all workers in the state of irregular working condition, which will lead to the society without labor unions. A revision to the Labor Contract Act came into force in 2013, which introduced a provision entitling an employee on a fixed-term contract who has been continuously employed by one employer for a total of five years or more to apply for an indefinite term employment contract. However, millions of workers on a fixed-term contract were fired before they fulfilled their five year employment duration and others were forced to work on an indefinite term employment contract of minimum wage job for whole life long.

On the other hand, the Cabinets and bureaucrats, for the purpose to obscure the government corruption and conceal government crimes including Moritomo and Kake school scandals (which raised suspicions of favoritism in the government’s decision-making processes over the school operators of far-right and Abe’s confidant with ties to the prime minister or his wife), teamed up to lie after lie, use sophistry, co-ordinate their story, and etc. And most of the Diet deliberations were spent for that. Democracy is getting suffocated and only the state violence is rampant.

Labor movements are now under massive attack. At the workplaces of Japan Railway Company (JR), over 35,000 members withdrew from the East Japan Railway Workers’ Union, the biggest and company union in JR, in just a few short months. This is also a part of Abe government’s attack to push ahead with a new Constitution go into effect in 2020. For the sake of completeness, Abe stood in with the JR management and embarked on a union busting to make a “society without labor unions”. They are attempting to destroy even the yellow union who took the lead in Division and Privatization of Japanese National Railways to split JR into pieces and transfer workers to small affiliate companies. Doro-Chiba militantly fought against the post war biggest attack on dismantling labor movements and is constantly fighting for the breakthrough in Japanese labor movements.

Kan-Nama has been driving epoch-making industrial labor movement by strong solidarity and unity of workers to fight against the industrial structure controlled by gigantic capitals—cement companies and huge general contractors—organizing medium and small ready-mixed concrete companies, which suffers being wedged between these capitals, to the business associations.  Nowadays, the state power together with the capitals attempts brutal oppression against this struggle.

It is also the oppression on a stronghold in Osaka prefecture, which is established by Minato-Godo together with Kan-Nama. Minato-Godo has been organizing the region as one labor union with the message “Unity is the workers’ honorable right for their lives”.

Meanwhile, UA Zensen (The Japanese Federation of Textile, Chemical, Food, Commercial Service and General Workers’ Union) which became the largest union in Rengo (Japanese Trade Union Confederation) fostered by Abe government and the capitals, is seeking to decide the “Course for the fundamentals of Japan” in next general meeting in September this year, that is “to delete Article 9 Second Paragraph* of the constitution and to specify the constitutional status of Japan Self-Defense Forces”.

*Article 9 Second Paragraph: “In order to accomplish the aim of the preceding paragraph, land, sea, and air forces, as well as other war potential, will never be maintained”.

In 1940, labor movement had been dismantled and was integrated to the Industrial Patriotic Associations (Sangyo Hokokukai); thus the war was waged. We must go back again to the lessons of the history.

Because of the neo-liberal assaults for 30 years, enormous amount of workers in all industries have been casualized, and so unity and rights have been broken, and social security, healthcare and education have been demolished.

The western Japan torrential flood disasters this summer were the state crime that resulted from the national policy of abandoning rural areas. These onslaughts have gone too far beyond the limit. Angry voices are mounting in the whole Japanese society.

Also such angry voices in Korea have overthrown the Park Geun-hye government by the “Candlelight Revolution”, and was responded in the US by the strikes of education workers in devastated areas against a terrifying reality “collapse of education”.

In “November Rally and 10 Thousand Workers’ Grand March”, our many friends will gather together from around the world.

Let’s fight together with the people of Okinawa, Fukushima and Sanrizuka (Narita struggle against airport construction) with fury in their hearts! We sincerely ask your endorsement to and participation in these rallies.

Name of the event: 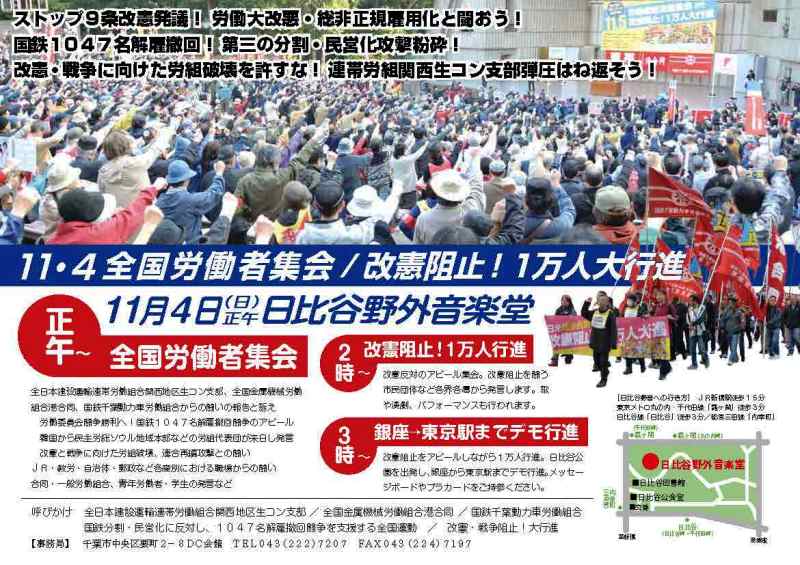