Don’t Send Weapons to Ukraine! Don’t Join in the War!

Smash the War Talks with a Massive Demo on March 22!

QUAD Talks for a War on China

The war in Ukraine is escalating; we are faced with an impending global nuclear war. The US Biden administration and the leading NATO countries are the ones preparing and provoking this war and intensifying it with military support and arms transfers.

The U. S. and NATO, don’t send weapons to Ukraine! Don’t join in the war! Putin, stop the war!

President Biden will visit Japan on May 22 for a U.S.-Japan summit on May 23 and thereby QUAD (Japan, U.S., Australia, and India) talks will be held on May 24. It is a war conference to advance the military integration and arms buildup of the United States and Japan and to escalate the war in Ukraine.

At the same time, it is a war alliance against China, which would lead to a world nuclear war.

The Kishida government aims to destroy all post-WWII restraints embodied in the war-renouncing Article 9 of the Constitution. That is the reason why Japan hosts the U.S.-Japan summit and the QUAD talks.

Capitalizing the war in Ukraine, the government has even proposed to obtain capabilities to attack the enemy command and control center—the enemy government. To ensure such military power, it has also proposed to double the defense spending to 2% of GDP = 11 trillion yen over five years. And furthermore, Kishida announced that he will attend the NATO summit in the coming June in Spain. All this is meant to launch a war on China.

Stop Turning Okinawa into a Frontline Base!

Okinawa, which now commemorates the 50th anniversary of their return to Japan, and the Nansei Islands together with Okinawa, are being turned into a frontline base against China. Late last year, it was discovered that the Self-Defense Forces and the U.S. military had drafted a new joint Japan-U.S. operation plan for a “Taiwan contingency.” This is an outrageous war plan based on the assumption that 1.6 million islanders will be trapped in a battlefield. A large number of new medium-range missiles are about to be deployed there. The SDF officers said there would be no time to evacuate the population.

This is a critical historical moment to stop the war and constitutional change, in solidarity with the workers who are rising up all around the world. 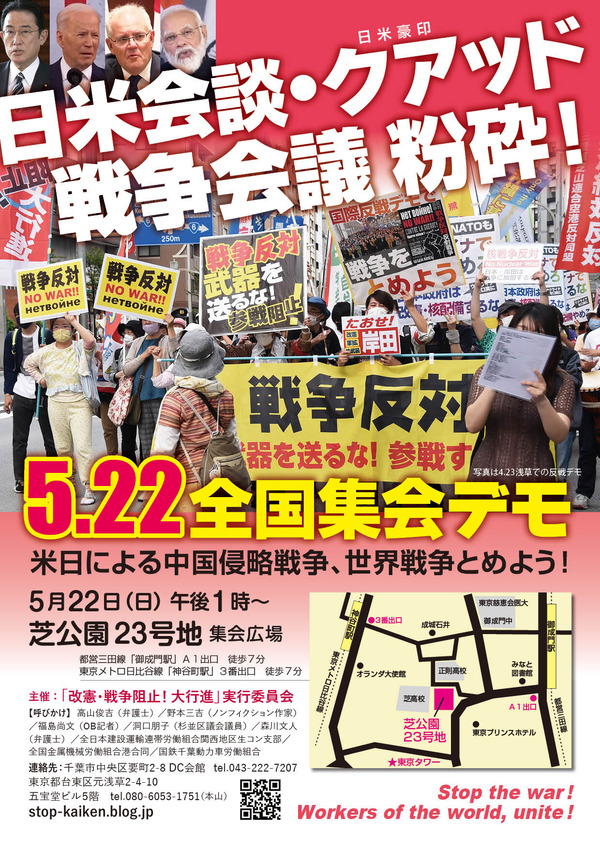