On July 8, 2022, former Prime Minister Shinzo Abe was fatally shot. The incident has once again exposed the ugly, intimate relations and corruption between politicians of the Liberal Democratic Party and the far-right Unification Church (now Family Federation for World Peace and Unification) over the past half century. At first, all the media downplayed and obscured the shooter’s motive, saying he had resentment against “a certain religion” and “an assumption that Mr. Abe had had a tie with the Unification Church.” Now, however, it has become impossible for them to divert public attention from the undeniable fact. One relationship after another between the Unification Church and politicians is being exposed.

Abe’s cozy relations with the Unification Church were a heritage from his grandfather Nobusuke Kishi and the strongest among the LDP. He made it into his own body. Therefore, it was inevitable that anger over the Unification Church’s destruction of the shooter’s family and life was directed at him. The LDP and the media call this an “attack on democracy.” No kidding. It is Abe who destroyed democracy more than anyone else in his whole political life.

Current PM Fumio Kishida made a cabinet decision on July 22 that Abe’s state funeral would be held on September 27. However, what took place under the Abe administration was the approval of the exercise of the “right to collective self-defense,” the railroading of the Security Law—the War Law—the revision of the Fundamental Law of Education, the drastic dismantling of labor laws, and the destruction of workers’ rights and unions. How many workers were forced into irregular employment, their livelihoods destroyed, and driven to their deaths in the process? In the recent Upper House election, he even vehemently advocated doubling defense spending and “nuclear weapon sharing.”

During his tenure as prime minister, he was exposed as corrupt politician in several kickback scandals and others.

In case of Moritomo Gakuen*1, Mr. Toshio Akagi, an employee of the Kinki Finance Bureau of the Ministry of Finance was forced to falsify official documents and was driven to suicide under the pangs of conscience.

Another case of corruption, the Cherry Blossom-viewing Parties*2 was brought to the Diet for questioning and it is recorded that Abe made 118 false statements. Kake Gakuen*3 is also another well-known Abe scandal.

Thus, more often than anyone else, Abe has destroyed democracy in various fields. Saying he is doing so “to protect and defend democracy,” Kishida is conducting a state funeral, for which there is no legal basis, only based on a cabinet decision. That is a flagrant denial of democracy.

We should never allow Abe administration’s war and neoliberal policy.

We will never permit the Kishida administration, taking advantage of this incident, to deify Abe by staging a state funeral to mobilize people for constitutional revision, war and large military expansion.

Workers have to prevail in our society. Only the workers’ united strength can stop the war, defend workers’ lives and rights and change the society.

We will confront Kishida administration who is rushing toward a war, and crush the neoliberal assaults. Now we are firmly determined to rise up for the revival of labor movement with all our power. Shinzo Abe was shot at during an election event. Photo: Getty Images, AP

*1 When the ultra-nationalist private kindergarten Moritomo Gakuen was established, Abe’s wife Akie was named as its honorary principal, and sold the state-owned land at a discount of 8 hundreds million yen. He also forced to tamper the official documents to cover up this corruption.

*2 During popular cherry blossom season, Abe annually invited his supporters on the extremely shamelessly luxurious banquet of cherry blossom-viewing parties at governmental expense (55millions and 190 thousand yen in case of 2019).

*3 Abe intervened in new formation of a veterinary department in universities. He excluded other candidate sites in favor of Kake Gakuen (Kotaro Kake is Abe’s close friend) emphasizing again and again on “matter relating to the prime minister’s will”. 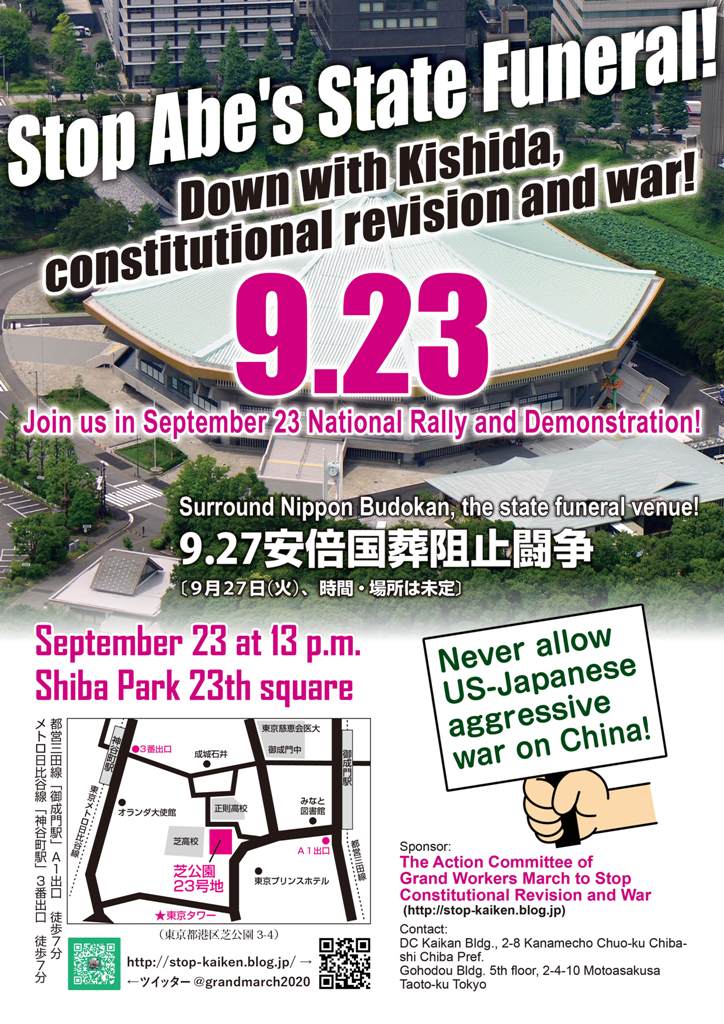