End the Invasion in Ukraine Immediately!

Let’s Stop the Escalation to Global and Nuclear War with All Our Might! 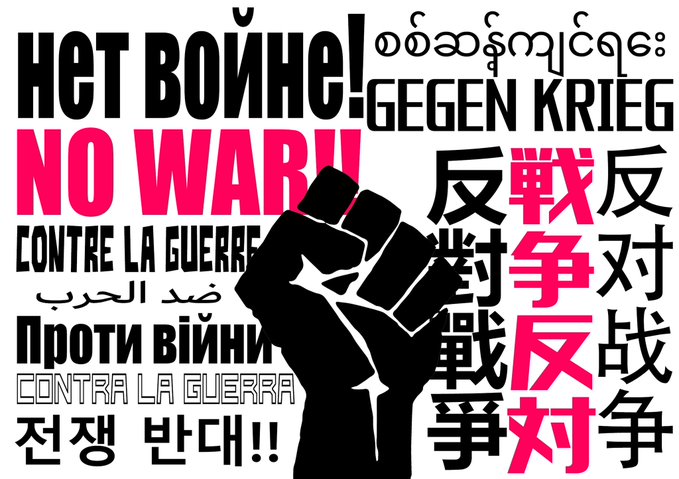 On February 24, the Russian Putin regime launched a large-scale military invasion of Ukraine under the pretext of “protection the population in eastern Ukraine.” We strongly denounce this genocidal war of aggression.

Since the collapse of the Soviet Union, NATO, led by U.S. and European imperialism, has introduced neoliberal measures in Eastern Europe and expanded its military encirclement of Russia. Finally, it has led the Putin regime to a desperate military invasion of Ukraine.

However, the Ukrainian people have launched strong resistance against this invasion, while the Russian people are fighting against the Putin regime throughout the country.

Meanwhile, the working class and people of the world, on whom the capitalists shifted all the burden of the pandemic under the depression, are taking to the street in solidarity with the fighting people of Ukraine and Russia.

This worldwide upsurge of struggles, combined with mounting anger against various neoliberal measures such as privatization, unemployment, growing inequality and poverty, dismantling of health care and social security, is leading to a struggle for the transformation and overthrow of their own imperialist governments, which are rushing to war.

The invasion of Ukraine will undoubtedly accelerate the ongoing US, Japanese and European imperialists’ scheme toward war of aggression against China. Japanese imperialism, seeing this situation as linking to the “Taiwan contingency”, has clearly embarked on the road to aggressive war.

Former Prime Minister Shinzo Abe, exploiting the Putin’s nuclear threat, called for “nuclear sharing” with the U.S., deploying US nukes throughout Japan. Current Defense Minister Nobuo Kishi, Abe’s younger brother, declared that Japan will maintain a force capable of “bombing enemy bases with Self-Defense Force aircrafts.” And current PM Fumio Kishida is pushing ahead with plans to convert Okinawa and the entire Nansei Islands into sortie bases and deploy intermediate-range missiles; thus, he is violently destroying the Constitution, which stipulates “renunciation of war and war potential.”

In workplaces of Japan Rail Companies, the management intends to render the knowledge, skills, and experiences which frontline workers have acquired through their own work unimportant, by eliminating all job titles, “merging” operations, and turning workers into “jacks-of-all-trades and master-of-none.” This unprecedented assault will undoubtedly spread to all workplaces. Such has been imperialism’s usual means to smash workers’ unity, atomizing them, and to mobilize them for a war of aggression.

We, Doro-Chiba and other unions and workers, will fight head on against this assault with strikes in the 2022 Spring Labor Offensive.

The prospect of ending the war and overthrowing imperialism, criminal warmonger, lies in the international solidarity of the working class without borders.

Let’s fight, in line with the struggle for the revival of the class struggle labor movement, to stop the war drive of our own government with a clear recognition that “war of aggression abroad” is one and the same with “class war at home.”

End the Invasion in Ukraine Immediately!

Let’s Stop the Escalation to Global and Nuclear War with All Our Might!