It was in 1998 that we organized November Workers Rally in Hibiya Open Air Concert Hall of the first time with an appeal of “Let’s set up a national network of fighting labor unions.

This year we are going to commemorate the 25th holding of this Rally which has been held every year without interruption.

Now we are just confronting the biggest crackdown in the post-war labor movement on Solidarity Union of Japan Construction and Transport Workers Kansai Area Branch (Kan-Nama) with 89 union members unlawfully arrested because of “a crime” of practicing labor movement.

In line with this attack, Japan Railway Companies are wildly engaged in forming a society without labor unions.

Nevertheless, our steadfast will of struggle has not a bit shaken.

We launched a David-and-Goliath struggle, mocked as quixotic by some “labor leaders”. However, the experiences and results accumulated through 25 years’ efforts to revive labor movement in face of endless backdowns of existing unions is no small achievement.

Now at a historic crossroads, we call on our colleagues nationwide and all over the world to join us in our resolute determination to enter a new stage of the struggle for the revival of labor movement.

It was amid the stormy drive of absorbing the whole Japanese society under the dominance of neo-liberalism, introduced by the Division and Privatization of National Railways, when we started to hold annual November Workers’ Rally. Today, after 25 years since then, we are experiencing the collapse of neoliberal assault by its own contradiction. Its brutal destruction of labor movement and devastation of society reached a critical point. Anger and painful cry are spreading in every corner of the society. Imminent war seems to be a sole exit from the crisis.

We would like to make the following appeal to all of our friends.

Firstly, we have been struggling with all our efforts to crush the unprecedented union busting against Kan-Nama and the enforcement of society without unions by the government and JR capital. Our struggle is for the workers’ rights and the future of labor movement. We are confronted with a union busting to establish a nation capable of waging war. In this serious situation Rengo (Japanese Trade Union Confederation) has been losing the base of its existence, deepening its crisis and sidling up to the ruling LDP party, they intend to abandon the substance of a national trade union center. The time has come to rebuild the workers’ movement by workers themselves. We will surely break the brutal oppression against the Kan- Nama union, for our common aim of revitalizing fighting labor unions. We would like to ask you all to support this struggle.

Secondly, we must end the neo-liberalism. Japanese wage level has been falling to the lowest level in the developed nations, and the poverty has been spreading over the society. We are faced with intensifying inflation. It will inevitably bring tragic consequences of people’s lives, especially for irregularly employed workers, women and children. “Equal pay for equal work” (the government’s Work Style Reform) has been proved as an outright lie. It is now apparent that its aim was all-out casualization of employment forcing every worker to work for the minimum wage. They have been fiercely promoting privatization, outsourcing, casualization of employment, greater flexibility of workforce merging multiple jobs, which forces each worker to be a jack of all trades. We must reconstruct all the society, i.e. employment, workers’ rights, medical treatment, education and global environment which have been torn apart and destroyed to pieces. It wholly rests on united workers’ shoulders. We must revitalize the labor movement.

Third, let us all rise up to work together to stop war and the revision of the Constitution. This is the most important task of labor unions. Unregulated capital’s running amok has thrown billions of people around the world into starvation and, combined with nationalism, destroyed everything democratic, and led to two decades of war in the Middle East. And now, the U.S. and Japanese governments are provoking a serious crisis of a war of aggression against China, focusing on ‘the Taiwan contingency’. The Kishida administration has been pushing ahead with an unprecedented military expansion under the slogan of “acquisition of enemy base attack capabilities”, and rapidly making Okinawa and the entire Southwest Islands marshalling bases. This coming May, Okinawa will celebrate the 50th anniversary of its reversion to Japan. However, under the cover of this “celebration”, Okinawa is once again being drawn into war.

The aggressive move to Constitutional Revision is imminent. The ruling and opposition parties have agreed to hold every week the Commission on the Constitution. Headquarters for the Promotion of the Constitutional Revision have been set up at LDP headquarters and at all prefectural branch offices, and Conventions to revise Constitution are about to be held in all prefectures before the May holidays. This year, we must resolutely stand up to fight over Okinawa and against Constitutional Revision. A war of aggression abroad and a class war at home are one and the same assault on working class. We call on every comrade all over the country. Let’s create grassroots struggles from every workplace and region. We call on all our friends around the world. Please join us in strengthening the ties of international solidarity to stop the war in East Asia.

Fourth, as an indispensable task of the labor movement, we will fight for the further progress of the international solidarity of workers; the November rally, together with the KCTU Seoul Regional Council, has developed into the Tokyo-Seoul International Joint Action until today. Workers around the world are beginning to resist neoliberalism like roaring wildfire. In the United States, new unions have been formed and strikes are spreading in every sector of society, and in South Korea, the KCTU has waged a general strike for social change. In Myanmar, life and death resistance to the military coup continues. We are living in the same world as contemporaries.

On November 6, this year at the Hibiya Open Air Concert Hall in Tokyo, we will hold the annual workers’ rally under the slogan: “End Neoliberalism with the United Power of Workers! Revive fighting labor unions! Stop constitutional revision and war!”  We ask you to give us endorsement for and participation in it.

Please set up organizing committees and meetings of supporters and supporting organizations across the country. Let’s discuss together, organize various actions, and create a plan for a change. Change does not happen like a bolt from the blue, it takes long hard work and time, sometimes generations. We are resolutely taking a new step in this direction. We hope that many of our friends will join us in this struggle. We live in a time when things that used to seem inconceivable are now possible. The revival of the labor movement is needed to stand on the front line of this important change in these times. We are the protagonists of our society. Let’s fight together. 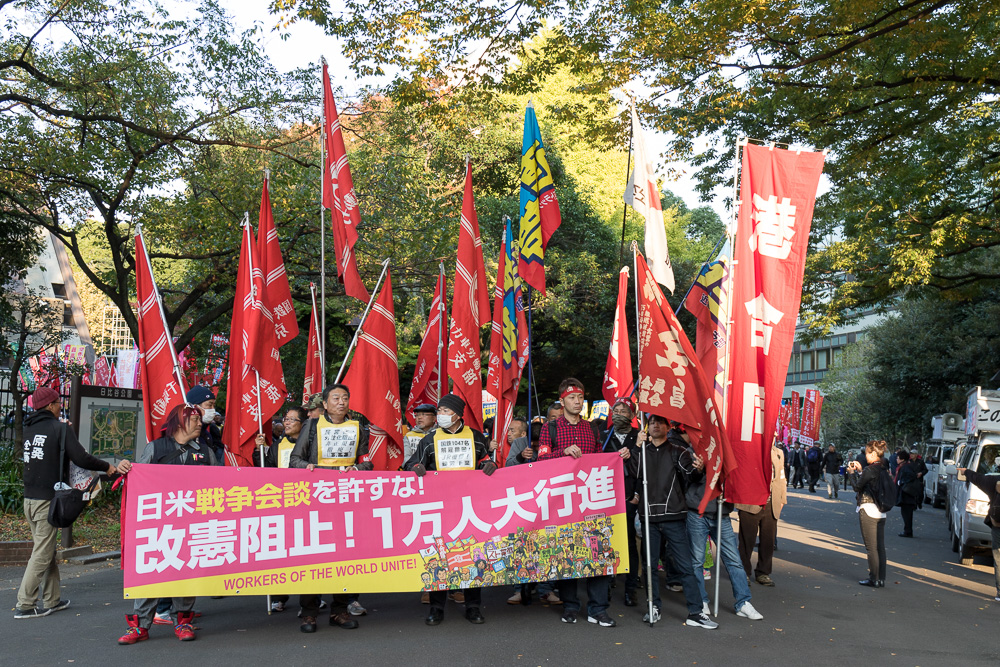