Report of the Hiroshima Grand Action held on August 6, 2021 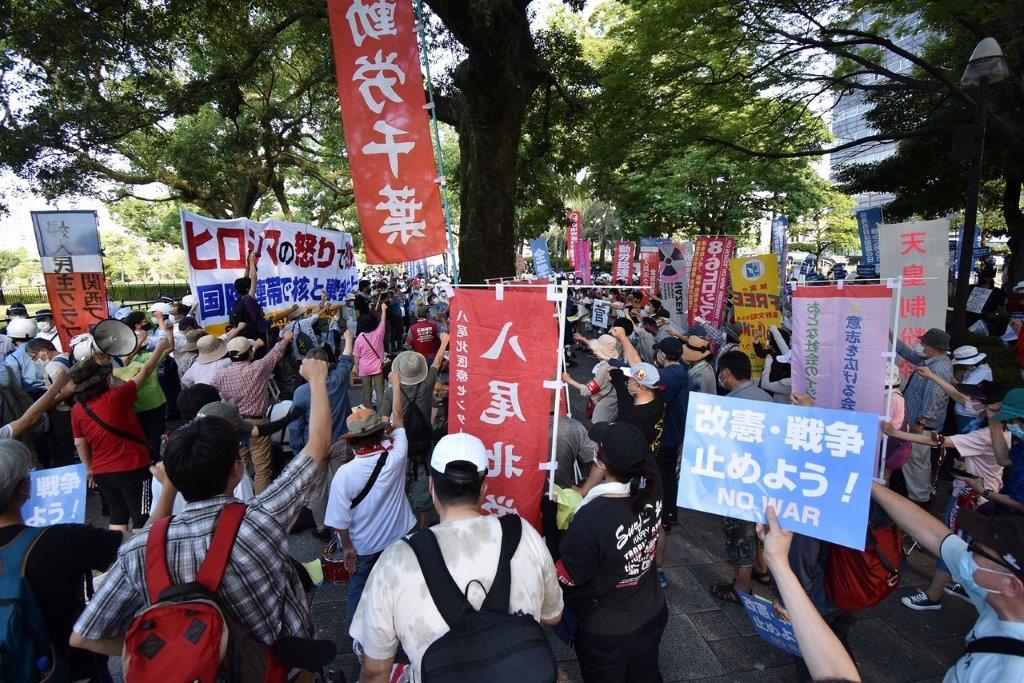 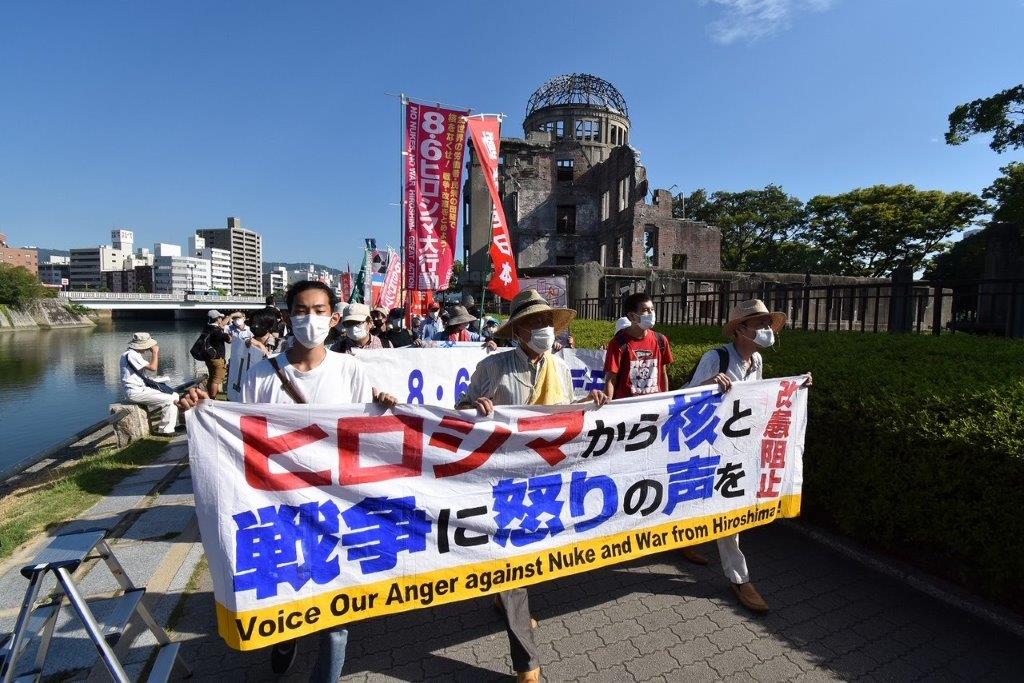 In the early morning of August 6th, the militant workers and citizens from all over the country gathered in front of the Atomic Bomb Dome in Hiroshima.

In order to destroy our protest rally, Hiroshima City Council railroaded the ordinance “to conduct a solemn ceremony” and mobilized right-wingers and reactionary historical revisionists. But this attempt was perfectly smashed.

Prime Minister Yoshihide Suga, fully responsible for the explosive spread of Covid-19, dared to make his way by forcibly carrying out the Tokyo Olympic Games. Trembled with fear at the serious situation of overwhelmed hospitals, brought on by his policies, Suga uttered outrageous remarks— “Only patients with severe cases can be admitted to hospital.”

Suga desperately tried to clear his own name at the Hiroshima Peace Memorial Ceremony.

“We never admit that!”—Our wrathful rally started with A-bomb survivors and their second generations in the lead. The militant workers and citizens of Hiroshima, Nagasaki, Fukushima and Okinawa declared their firm determination to overthrow the Suga administration which intends to revise the Constitution and rush to fresh aggressive war.

After a minute of silence at 8:15 in the morning, the historical moment of the Atomic Bombing of Hiroshima, the demonstration started to the ceremony place in defiance of the administrative order to carry out “a disciplined march without noises”, loudly shouting: “Go away Suga, a prime minister of constitutional revision and war!” “Ratify immediately the Nuclear Weapons Ban Treaty!” “Down with the Suga administration, shameless promoter of Tokyo Olympic Games ignoring human lives!”. These slogans clearly got up to the participants of the ceremony.

Suga, totally upset by the angry protest cries of the demonstrators from outside of the ceremony place, dropped by mistake in his speech the decisive sentence,

“Japan, as the only country to have experienced the horror of nuclear devastation in war, understands the inhumanity of nuclear weapons more than any other country on earth. It is important to steadily build up efforts over time towards the realization of a world free of nuclear weapons.” He thus exposed his miserable state of mind as a bankrupt politician by his poor address in front of all the participants of the memorial ceremony.

The action in the morning ended with protest calls in front of Chugoku Electric Power Company, a promoter of the nuclear power plants: the demonstrators raised their angry voices in solidarity with the struggle in Fukushima for the common cause, “Stop construction and restart of nuclear power plants!” “Admit the harmful effects of thyroid cancer!” “Don’t let the contaminated water into the ocean!”.

In the afternoon, “August 6th Hiroshima Grand Assembly in the 76 years’ commemoration of A-bombing” was held. The important part of the meeting was occupied by a report on the complete victory of the long-years lawsuit which finally admitted the devastating effect of the ‘black rain’ (rainfall immediately after the A-bombing) on the health and lives of citizens of Hiroshima. A gigantic step forward has been taken to fundamentally shake the nuclear weapons and energy policies which completely neglect the internal exposure of radiation. 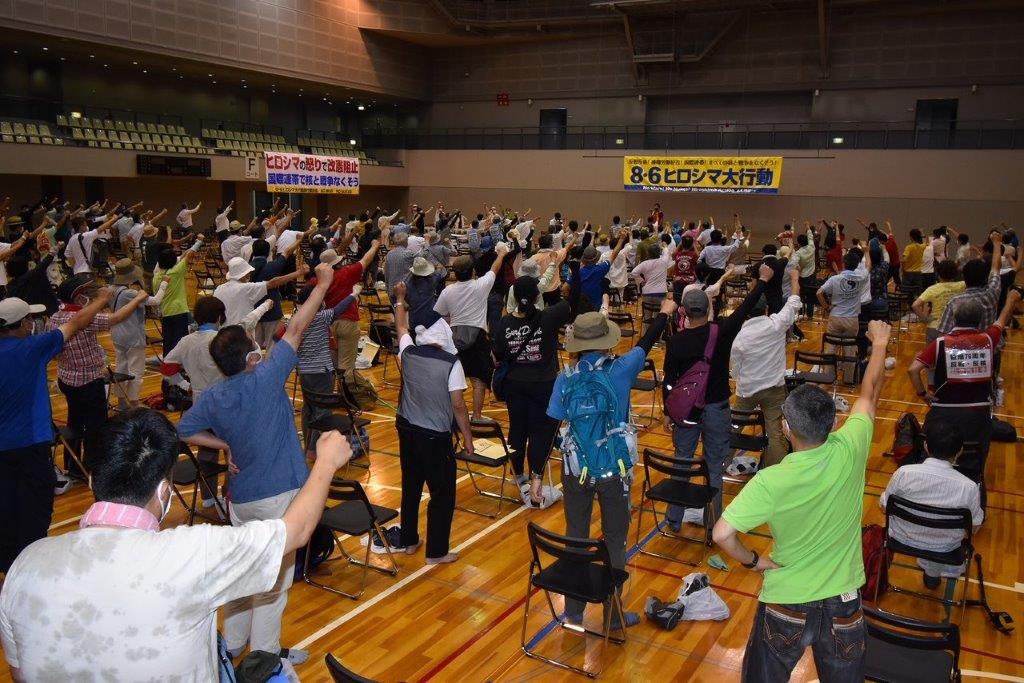 All the participants have confirmed the common achievement of the struggle on August 6th Hiroshima, August 9th Nagasaki and decided to successfully organize August 15th assembly (76 years’ commemoration of the end of World War II) for the full mobilization of November 7th National Workers All-out Rally. 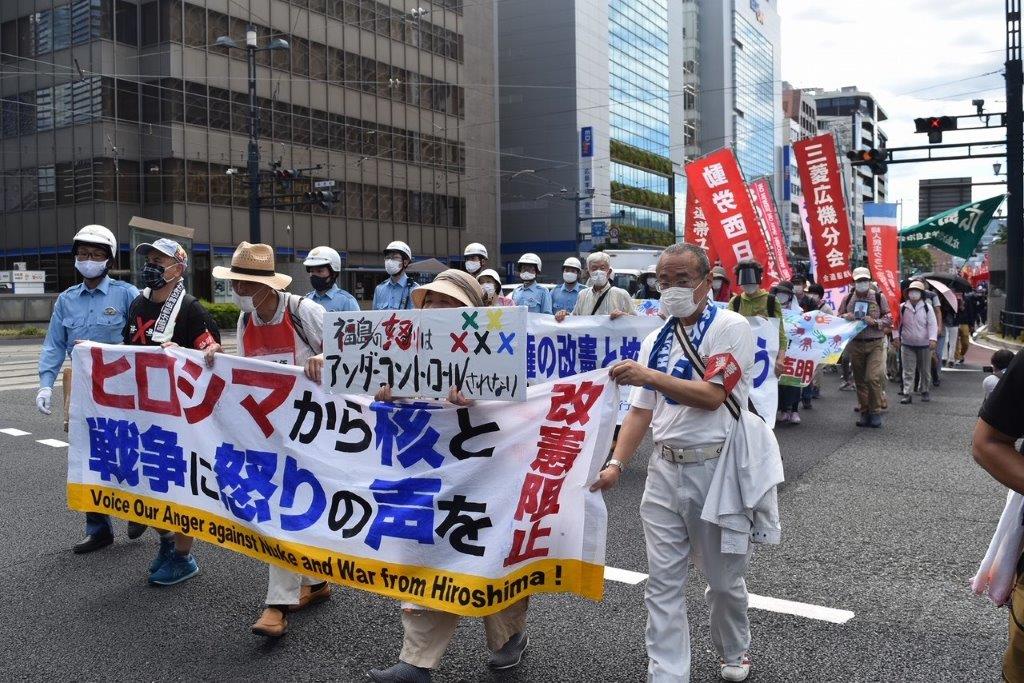 Thus, the determination has been strengthened to stand at the forefront of the struggle to overthrow neo-liberal offensive, which is rushing for aggressive nuclear policy, constitutional revision and war, by organizing from workplaces and campuses.

The afternoon rally was followed by a militant and powerful demonstration in the central part of Hiroshima city under the extreme hot sun.

The closing slogans were: “Never again Hiroshima, Nagasaki and Fukushima!” “No constitutional revision! Stop war preparation on China!” “Let’s create a world without nukes and war by the power of international solidarity!”

A fresh struggle has started!

Appeal for endorsement for and participation in August 6 Hiroshima Grand Action on the 76th Anniversary of Atomic Bombing on Hiroshima!

No to ongoing preparation for nuclear attack and aggressive war on China!

We are facing an impending nuclear war in 2021, 76 years after the Atomic Bombing on Hiroshima.

Japan-US Summit Talk in April has confirmed the defense of Japan with all possible abilities including nuclear weapons, and the need of buildup of Japanese own defense capabilities as well as exercise of the so-called “right of collective self-defense” in case of emergency of Taiwan.

In line with this decision, the US forces are constructing anti-China missile network in the first line of archipelago from Okinawa to Philippine, and Japan Defense Forces are dispatching intensified troops to Okinawa mainland and South Western Islands, meanwhile Japan-US joint military exercises are frequently repeated in these sea areas.

We are firmly opposed to the ongoing drive for nuclear war on China, Japanese participation in it and constitutional revision to legitimate all these schemes of war.

Let’s stand up for independent action to open up a brilliant future of our own!

While a large number of people are losing their lives, being deprived of necessary medical treatment, the Suga administration is putting all priority on carrying out the Tokyo Olympic Games in shameless disregard of devastating medical collapse. Anger of Japanese people is boiling up against his politics for the profit of 1% “wealthy capitalists’ class” with ignoring 99% people suffering under the concentration of accumulated contradictions of the

capitalist society in its deepening crisis.

Enough is enough, a society in which people are squeezed, scrapped and thrown on the street to die!

What we urgently need now is to stand up for independent action to open up a future for us 99% people. In recent years we have witnessed encouraging examples of struggles: The longtime struggles by the people exposed to the “black rain” (contaminated rain just after the atomic bombing on Hiroshima) has won the suit recognizing the health disorders due to internal exposure to radiation; the conclusion of the Nuclear Weapons Prohibition Treaty has been achieved as a result of the efforts of the victims of atomic bombing and nuclear casualties

of the world; nationwide struggle has been developed headed by Fukushima people against the concealment of nuclear exposure, emission of contaminated water and all the governmental nuclear policy; Hiroshima struggle against war and nuke has been tenaciously continued. All these struggles have been organized under the active initiative of atomic bomb victims, labor unions, peace organizations, students and young people themselves.

We call on you to join us in Hiroshima in solidarity with the world-wide independent struggles of the people, such as in Myanmar, Hongkong and elsewhere for the future of 99% people of the world!

Raise our voice against war and nuke on August 6th!

In line with the move to constitutional revision by the Abe and Suga administrations, a continuous attempt has been made to suppress demonstrations on the Hiroshima Day with an aim of crushing the fighting history on August 6th. Resisting this reactionary trend, represented typically by the recent city assembly decision of pseudo “Peace Promotion Law”, which in its essence intends to prohibit the rally and demo as disturbances of the August 6th commemoration ceremony, victims of the atomic bombing and many people have expressed their firm opposition, headed by Mr Mimaki, acting director of the Japan Confederation of A- and H-Bomb Sufferers Organizations of Hiroshima, who warns that this repressive measure brings us back to the political situation in Japan at the time of the atomic bombing, when people was silenced by the war-time brutal regulation of freedom of speech.

The Hiroshima municipal authority is still shamelessly intending to invite Prime Minister Suga to the August 6th ceremony in Hiroshima.

Down with the Suga administration by the people’s anger of August 6th of Hiroshima!

Testimony by the victims of A-bombed victims

Meeting of youth and students

Assembly in front of the A bomb Dome

After silent prayer, demonstration to oppose the participation of Prime minister Suga in the ceremony (destination of the demonstration is the Head office of the Chugoku Electric Power Company)

At the arena of the Prefectural General Gymnasium

Bus study tour: visits to monuments and old battlefield commemorating of A bombing

Start from the east gate of Hiroshima Castle, reservation needed