The Hong Kong people’s struggle since June of this year against the revision of “Fugitive Offenders Ordinance (amendment) bill” has entered a new stage.

The police attacked the protesters by firing vast amount of tear gas and even fired live ammunition. Furthermore it is reported that they intend to mobilize People’s Armed Police (PAP) or the People’s Liberation Army.

We cannot help expressing our extreme anger at this outrageous repression against people and resolutely denounce Hong Kong government and Chinese government.

The five main demands, i.e. democracy, universal suffrage, and the fight for pursuing illegal police violence, which have been expressed by Hong Kong workers, are absolutely right and natural demands.

The unyielding struggle to overthrow Carrie Law administration which has continued over 5 months, should be inscribed in the history for the liberation of workers and cannot be stopped until Hong Kong’s liberation.

The Abe administration in Japan is going to enforce constitutional revision and wage aggressive war with breaking up of labor unions as its first step. Outbreak of fierce struggle is inevitable, however, against this onslaught.

Hong Kong’s struggle has become the “axis of rotation”. A tide of the workers’ struggle around the world has arisen with new international solidarity.

We will never admit again the coming of the time of dictatorship and war. We are determined to fight together with workers in Hong Kong.

Never admit the crackdown by Chinese’s and Hong Kong’s governments!

Never again the Massacre of Tiananmen Square in 1989!

Let’s fight together with Chinese workers and each ethnic groups under the oppression of Chinese government!

Let’s win the struggle of Hong Kong’s workers and people with unity of the workers of the world! 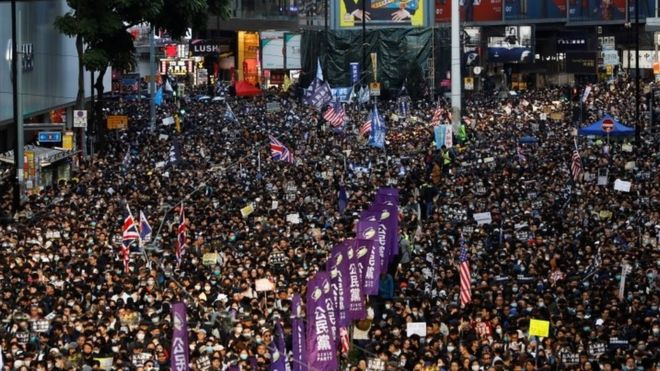