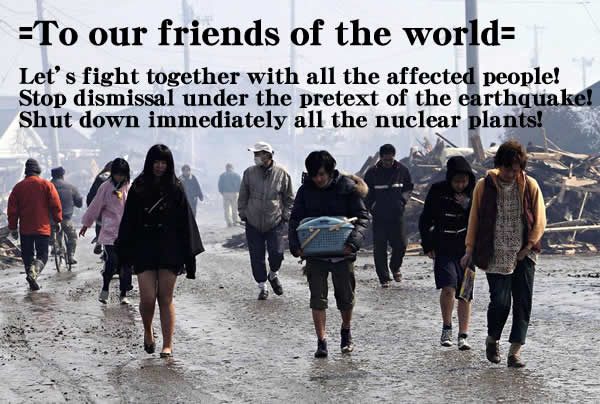 On March 20th, 2011 in Tokyo, we held a rally with about 1500 participants to raise angry voices at a serious situation, which was brought about and exposed by the recent Tohoku (East Japan) Earthquake. It was the only action of protest, while networks of transportation has been disrupted not only in earthquake-affected Tohoku but also Tokyo and Kanto area and the government is putting pressure to refrain from organizing independent actions in the actual circumstances. The purpose of the rally was to organize anger of people against the awful and brutal reality, to denounce the deceitful policy of the government and to demand disclosure of the facts on the whole development in concern with the disaster.

A large quantity of relief goods are brought to the rally, including several hundreds kilogram of rice, several hundreds of gas cylinders and other necessary items. Those materials are instantly sent to the suffering areas together with abundant relief donation. The rally issued an appeal, calling on a nationwide struggle to fight mass dismissal and a worldwide campaign to demand immediate shutdown of all nuclear plants.

Confirmed death toll is approaching ten thousand and nobody knows how many it will be. It should be noted that only few people were killed by the earthquake. But the ensuing tsunami was the major cause of the lost lives because no effective administrative measures had been taken to prevent the disaster. Hundred billion yen of budget for the construction of levee in dangerous coast areas had been cut off by the administration of the Democratic Party, not to mention the formers Liberal Democratic governments. The disaster is man-made. The logic of capital has brought it forth.

Many stricken areas have still been abandoned, while only a part of the shelters are exceptionally provided with the governmental relief goods only in these couple of days. In those shelters and hospitals, which have got no supply of foods or medical treatment, an increasing number of people is driven to death. The floors of the most hospitals are full of patients. Lack of means of transportation hinders sick people in shelters from being sent to hospital for necessary treatment.

Not only the coast areas, which are suffering from a devastating damage but also inland cities like Sendai of Miyagi prefecture have been under terrible condition without foods and gasoline. It is caused not by the lack of the necessary materials or means of transportation but by the inaction of corporations concerned, which hesitate to make extra expenditure required for making detour for transportation in face of ruined normal road. And the government remains indifferent. A lot of people are being killed by the inaction and inability of the government. This is the reality of market economy.

Moreover, the government has given an instruction that no relief goods are directly sent to shelters individually or privately and they are to be brought to the windows of the governmental or municipal offices for transportation.

Brothers and sisters of the whole world!

It is reported that water supply has begun in a part of the affected areas. But a bad news came that in water in Fukushima prefecture radioactive materials above the normal value are found and it is forbidden to drink water. Shipment of several sorts of vegetables and milk was prohibited in fear of radioactive contamination in Tohoku as well as Kanto areas.

Wrecked nuclear plants are letting out radioactive materials of high level every day and night and driving the inhabitants in the surrounding areas in a growing fear. Yesterday a black smoke rose up from the reactor and the works to recover electric supply and cooling down of the reactor are hampered. Repeated blasts caused exposure of used fuel rods. It is still impossible to assess the actual condition of radioactive core and the worst case is approaching.

In face of this grave situation, the government has totally abandoned to take necessary and effective measure for evacuation in fear of creating panic. No information is given on what could happen tomorrow and people are forced to live in terrible fear. But people there are fighting the disaster and making every effort to live. For workers, farmers and fishermen, there is no place to evacuate. Anger and hatred are mounting against the administration and authorities concerned that had promoted construction of nuclear plants, insisting that nuclear energy was absolutely safe.

We call on all the friends around the world not to let “them” repeat the same disaster. We pledge to fight to live and confront squarely whatever danger assaults us. Let’s rise up together with us to abolish nuclear plants and nuke once and for all. We urge you to fight to overthrow those who are promoting nuclear plant construction and seeking only capitalist interest at the sacrifice of working people.

Massive unemployment is threatening us now

Not only the disaster areas but also the whole areas of East Japan are facing massive dismissal and unemployment. Tens of thousands of workplaces are hit by the earthquake and tsunami and immobilized in Tohoku and Kanto areas. A large number of factories are obliged to stop operation all over Japan, because major car manufacturers and electric machinery corporations have promoted outsourcing and their production is dependent on sub-contractors or sub sub-contractors which provide them with necessary parts and they are located in many cases in the disaster area. Therefore, not only the directly hit workplaces but also workplaces of other areas are indirectly affected by the disaster, producing a huge number of losses of jobs temporarily or permanently. A large number of workers who are in irregular employment are thrown out of daily work without any assurance or allowance. The number of possible jobless people is beyond assessment. No rescue measure is offered or planned for those jobless workers. Japan is going to be a huge unemployment peninsula as a result of the earthquake.

We are now witnessing rapidly rising yen. It is caused by speculative capitalists who are seeking to get margin through financial operation in this very moment, taking advantage of the disaster like greedy hyena. To address this adversity, the Bank of Japan decided to offer 80 trillion. What does it all mean? For them, the disaster offers an opportunity to make money. This is what capitalist ruling class is doing. Something is f
undamentally wrong with thi
s society.

What has happened and is happening now is evidently far beyond our present power. We need to develop our power through establishing close links with mounting voices of angry of a large number of working people in order to confront the horrible situation before us.

On March 16th, Doro-Chiba together with the National Coordinating Center of Labor Unions has set up People’s Earthquake Relief Center. We are determined to gather all power for the relief activities, calling on all working people to “unite and fight to live” in a nationwide campaign for the suffering people in Tohoku area.
We also call on all brothers and sisters of the whole world to send donation of unity and solidarity to the address below.

Some or all of the following data 1 to 9 are required to send a remittance to Japan. And if the purpose of remittance is questioned, please reply that remittance is made for relief to the earthquake in Japan through the National Railway Motive Power Union of Chiba (for short, Doro-Chiba).

8. Account name: Kokutetsu Chiba Doryokusha Rodokumiai
Note: “Account name has to be written in the Japanese full name of Doro-Chiba. 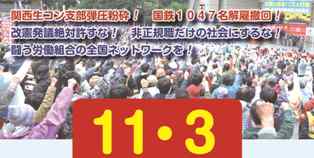 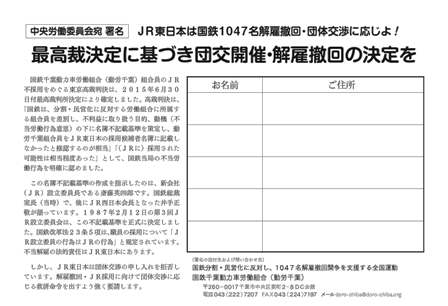